How to Manage Childcare When Working From Home

Controversy is currently surrounding the subject of rearing children while working from home. Elizabeth Duff, senior policy advisor at the National Childbirth Trust, pointed out that parents who work from home can't simultaneously look after their children. 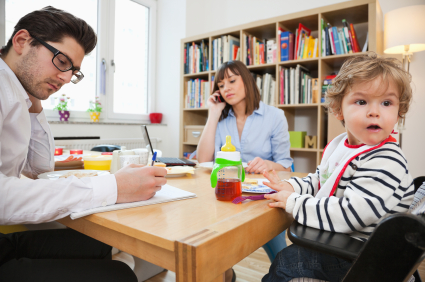 As a former single mother I agree, although at one point I did think I had the balance right, I soon suffered as a result. Here's my own story:

As a single mum of an 8 and 4 year old working from home without too much childcare wasn't a problem. They were both at school and I could work around this time along with using the evenings when they were in bed.

During school holidays I'd often book them into out of school clubs but despite this friends and family still thought it was perfectly ok to pop round with their own children!

I was very lucky with mine as they understood I'd chosen this path so they didn't have to be latch key kids, so on a rainy day they'd often settle down to watch a movie quietly while I worked from a laptop beside them. Friends, thinking I must be available would take this time to drop off their own children and then our peace would be shattered.

When the opportunity to move to a farmhouse and smallholding came up we jumped at the chance and the three of us started our idyllic life of raising chickens, writing and a small village school. Friends would have to ring to make sure we were available first and so for a while, working without childcare was easy.

Then I met my husband. Suddenly there was something else to do on the nights when the children were fast asleep and work began to pile up. He helped by doing the school runs and entertaining the children which gave me extra time during the day.

A Matter of Life and Death

Then our third child was born, while at the same time my husband's father became very ill. Suddenly I was left juggling a fulltime job with a new born baby in a three week long Easter holiday so the other two needed fulltime care too. My husband understandably was away by his father's bedside and I managed by the skin of my teeth for 4 weeks until I haemorrhaged and ended up in hospital attached to a drip.

We'd agreed that with the birth of our third that my husband would take care of daily childcare leaving me to work. The costs we saved on childcare and travel outweighed the money he'd make in a fulltime job. He couldn't take the children with him as his father was in intensive care and so he became stuck between a rock and a hard place not knowing where he was needed the most.

Eventually he made the decision to come home as his father slipped into unconsciousness he realised he couldn't do anything for him but he could help myself and the children. In a cruel twist of fate his father died while my husband travelled home on the train.

His family have never forgiven him, they believe I should have coped with the job and the childcare, when work had slipped so much I'd sold all of our furniture on EBay just to meet the rent! With hindsight we'd have to do the same all over again.

Today we have very clear roles, our daughter is two and the other two are 12 and 8. My husband looks after them all on weekdays and I leave for work at 8 returning at 6 for the bedtime routines. Over the years my husband has built up his own business and now works on a weekend as a painter and decorator when our roles are reversed.

We still face criticism as we shift dates or let people know that visiting during working hours is simply not an option, nothing shrieks of unprofessionalism than a house full of children when there are CEOs in my office. I've now got an office that's still attached to the house, but far enough away so the children can pretend I'm at work- yet our children understand the boundaries during working hours, others do not!

In summary I do believe it's possible to work from home and look after the children providing that:

Otherwise I agree with Elizabeth Duff, when working from home AND looking after children something has got to give, be it the parenting or your work as it's impossible to give both 100% simultaneously.

Jobs for Stay At Home Mums
Avon Business Model - How to Make Money
Mums Can Make Money From Home!
Pros and Cons of Parents Working from Home
Extra Income for Stay at Home Dads